Tennis certainly gives you a good foundation to build from; but then you need to develop the specific beach tennis skills. In my case, it was a real battle to get used to the open stance body position playing your shots. 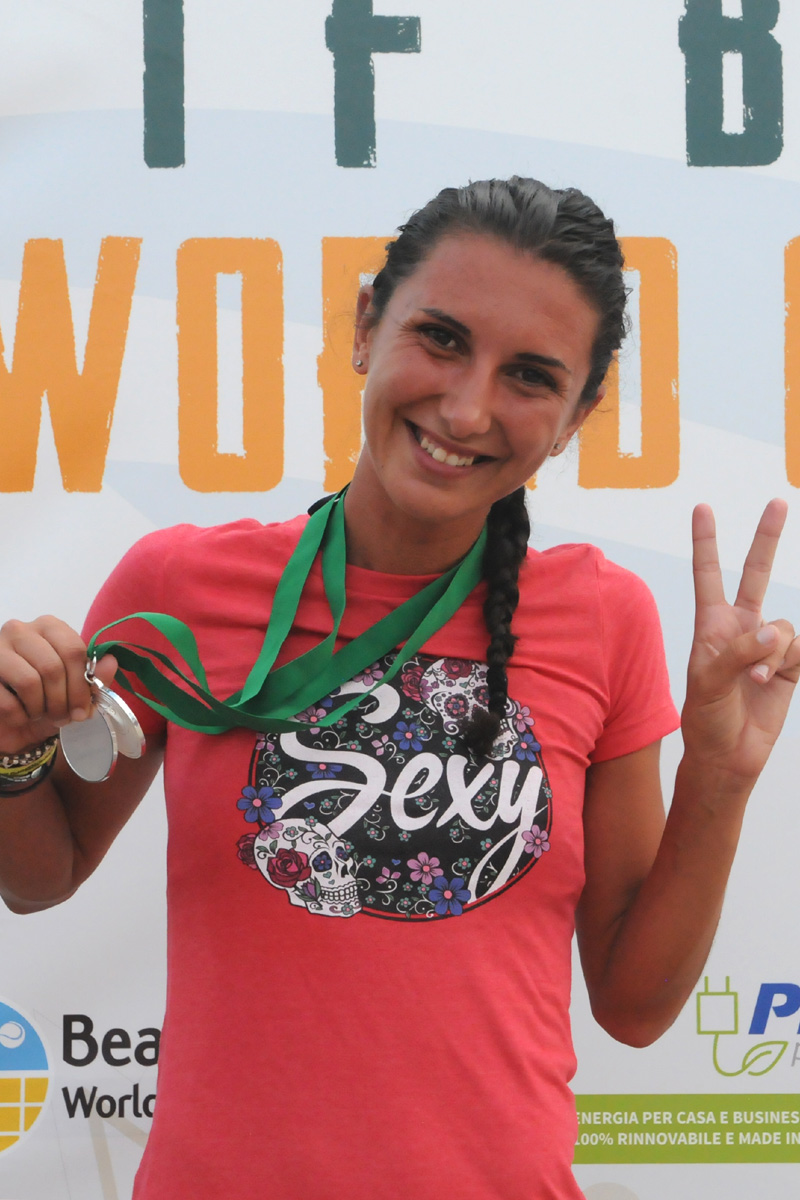 In commemoration of the 10-year anniversary of BEACHCLUB2010®, we wanted to give a voice to our friends and faithful companions who have been by our side throughout our journey. We spoke to players, organizers and commentators about their beach tennis stories. You can find them in the following interviews.

Sofia Cimatti, 27, is one of the most successful beach tennis players in the world. Since she started playing in 2009 she won four world championships with four different partners. Two of them in doubles with Veronica Visani and Federica Bacchetta and the other two in mixed doubles with Matteo Barbieri and Matteo Marighella. From 2017 to 2019 she reached the final of the women's doubles, in 2015 of mixed doubles. Since 2012 she is one of the top 10 players in the ITF rankings. In 2017 Sofia Cimatti joined our beach tennis camp in Cervia and teaches a group of German players during their vacation.

In our interview she talkes about her most emotional title, the limits of beach tennis in Italy and her future on and off the court.

How many times did you think about this score of 5-3 in your favor in the third set of the final of the ITF World Championships in 2019 in Terracina?

That's a good question. Honestly a lot of times! The World Championships for me always had a special value, and not having been able to win it last year though we were one small step away was really dissapointing. But it adds to my experience!

You then lost the set 5-7, and it was the third time in a row you experienced a loss in the final of the WC. What happened in that moment, with all your experience, why couldn't you close the match?

The emotionalism and the mental strength for sure made the difference. Probably we lost perspective to close out the match. But then, especially last year, I have to admit that our opponents Maraike Biglmaier and Rafaella Miiller played very well, it was a battle to the last point. Unfortunately it ended bad for us.

You are a very calm person. How do you react to such a loss? What did you learn from it?

I've learned (or tried to learn) not to let the situation take over, to stay calm. And to think that what you do is exactly what you love to do and where you are good at helps not to get involved too much by the situation. If you have fun at what you do you always have an extra gear. Tu put too much pressure instead sometimes doesn't help.

In spite of everything, there are only two players in the beach tennis world who won two titles at the World Championships in the same year. Do you know who they are?

I won the women's doubles with Veronica Visani and the mixed doubles with Matteo Marighella in 2013. For sure that was a great experience, unexpected and incredible! I don't know who the other player might be.

The other one is Alan Maldini, who won the doubles with Luca Meliconi and the mixed doubles with Elena Vianello in Rome at the WC 2010. You already won four world titles, what does that mean to you today?

Well, until last year it was my greatest ambition, since the start of this year I'm takting it more calmly, just thinking about giving the best I can. But for sure that was a great confirmation, and winning it all again after all this losses in the finals would be a little dream come true.

It looks like the title you won with your friend Federica Bacchetta has been the most emotional one. What relationship did you both have on the court?

Yes, for sure that has been a very emotional victory and the coronation of a great season. But to be honest with you the even more emotional title was the one clinched with Veronica Visani in 2013. Unexpected and terrific! I have a special relationship with Federica, she's my best friend, and all the victories we celebrated together were great. Before we became partners on the court we have been friends, and this fact made us be so successful.

So it seems to be very important to have a good relationship with your partner outside the court, too.

For sure it gives you something more. I think that it's very important to have a good connection outside the court to be able to share with each other at a hunderet percent everything that happens!

When you started to play beach tennis in 2009 it was an all Italian sport. Meanwhile you can find a lot of foreign players on the podiums, players from Brazil or Russia for example. For you that means: more competitors. But what does that mean for the sport of beach tennis?

This fact is a big step forward for beach tennis. That's the only way the movement can expand and maybe one day be part of the Olympics.

You started playing beach tennis and winning tournaments as a teenager, then you became world champion. Most recently women's beach tennis seems to be in a crisis, even in Italy a lot of young players quit playing. What reasons might there be for this development?

For sure there is much more going on in men's beach tennis. The sport has to find a way to motivate young players so that they can see a future for themselves investing in beach tennis.

Nowadays beach tennis in general is changing, with new rules from the ITF and bigger tournaments. What do you think about this development, are we on the right path?

Absolutely yes! The new rules should make the game more spectecular. Now if we could make this sport compatible for television, it might be the turnaround. For now there is still too much lost time during matches, and a tecnology must be found for efficient streaming so that both the difficulties of our game and the spectecular rallies can be shown.

Since 2017 we are organizing a huge ITF event in Saarlouis. You lost all three finals at this tournament. From August 20 to 23 we're going to be part of the new ITF Sand Series. What are your expectations of this new event?

This will definitely going to be a great event. Like in the past years this will be one of the biggest events worldwide, and the best teams will battle it out for the title. The spectacle will be assured.

You have been more than once in Germany. What memories do you have of our country?

Yes, it's been a few years that I come to your tournament in Saarlouis and other events in Germany. The organisation is always exemplary. This year I hope to finally win the title!

In 2017 you started coaching a group of German players in Cervia, organized by our BEACHCLUB2010®; young players and adults. You startet your career with tennis, what advice do you have for our players?

Well, for sure they have to practice regulary and try to improve every time. The beach tennis camp we organize in Cervia is a chance to learn something on top that can be used later. For sure a great experience for both me and the players!

Is it more an advantage that you knew how to play tennis or did you experience some problems when you startet with beach tennis?

There is for sure some advantage, but I can't negate that there are also some disadvantages. Tennis certainly gives you a good foundation to build from; but then you need to develop the specific beach tennis skills. In my case, it was a real battle to get used to the open stance body position playing your shots.

This year our BEACHCLUB2010® is celebrating its 10-years anniversary. What are your best memories?

All of your events I have participated in for many years and the beach tennis camp we are organizing in Cervia for me are great and enspiring events!

When you are on the road for beach tennis tournaments you often meet the same players. What about relationships in the beach tennis world? Did you find a lot of friends abroad?

Yes, we always get to know a lot of people from all around the world. This is incredible and I feel very lucky about it. I had the chance to meet a lot of great people with whom I could build good relationships and others I have only on the court. Anyway, it's an unique experience.

At the World Team Championships, where it is important to have an efficient team, Italy since 2017 hasn't won the title. Are the opponents too good?

The opponents improved a lot for sure in the past couple of years. Italy from this point of view is limited, because the national federation in my opinion is not investing enough in beach tennis. As a result the players are less motivated. An efficient group in this kind of team competition surely makes the difference. Only if you find the right balance you will succeed! For one reason or the other we couldn't find this balance in our team in the past years so we could have won the title. Let's hope in next year!

In the distance 2010 at the World Championships in Rome you played with Camilla Scala. It was one of your first tournaments on the ITF tour and the innaugural year of our BEACHCLUB2010®. What did you expect ten years ago from the future of beach tennis and how much did really happen?

Yes, that was one of my first tournaments. We played at the Foro Italico during the international tennis tournament. Beach tennis was limited then and for sure it had a good development. But maybe there has been made some mistakes and that's why we are not where we wanted to be. But in the last couple of years it is tried to value more our sport. I hope we are on the right path. The big turnaround definitely would be to bring it on television.

On the other hand how do you see your own future after your life in beach tennis?

That's a good question. Honestly I don't know how many more years I will play. Unfortunately we are still at a level where it is not enough to be just a player for all the upkeep costs. And this has an impact in the decision to make for the future. I'm not an 18-year old teenager anymore, so I have to take into consideration what I want to achieve in my life. If there was an increase of big events, an insurance for players along with stability, I would consider playing for much more years. If not I don't know how many years I could do all this work for beach tennis. So for now I'm enjoying the moment, working as a beach tennis coach in my free time.