We’ve brought-up our supporters well, I have often jokingly said to the players. It didn’t matter who got to the final, our supporters were always plentiful; strength coming from the unique atmosphere that one could breath on the Centre-Court in Cervia. 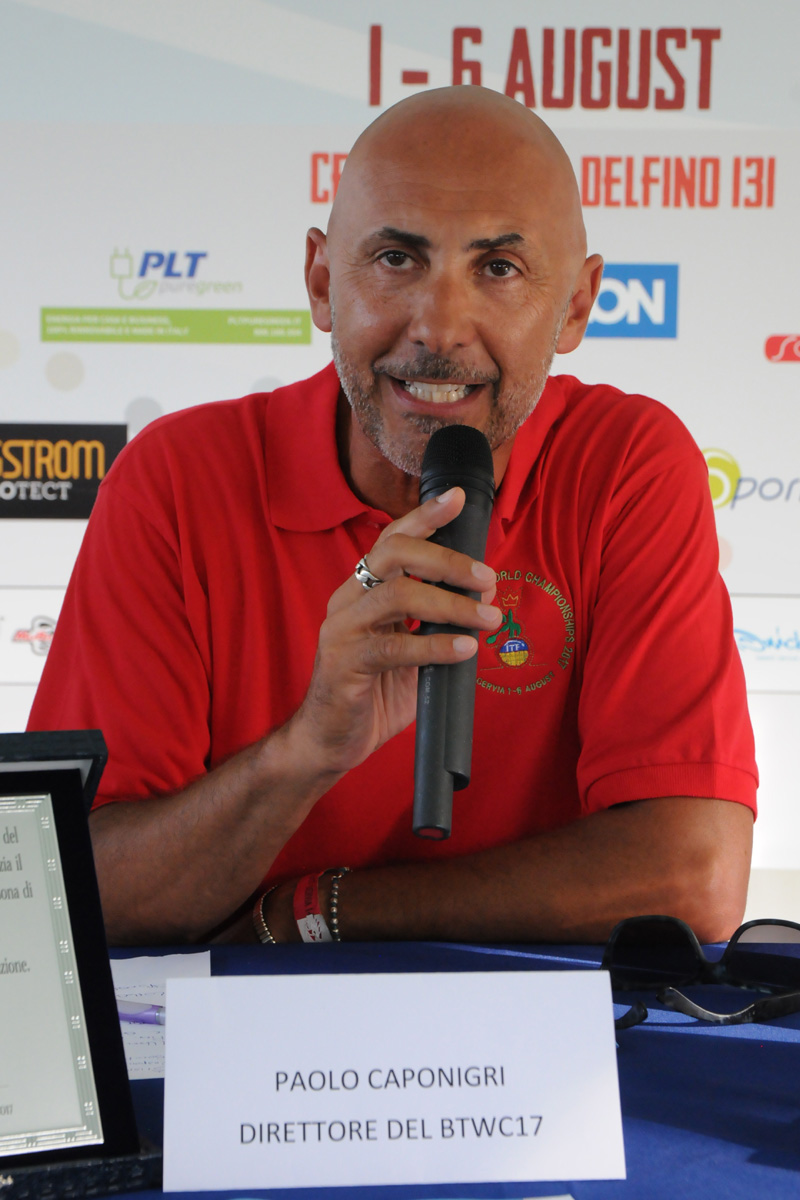 In commemoration of the 10-year anniversary of BEACHCLUB2010®, we wanted to give a voice to our friends and faithful companions who have been by our side throughout our journey. We spoke to players, organizers and commentators about their beach tennis stories. You can find them in the following interviews.

Paolo Caponigri, 55, lives in Riccione/Italy but is known for his events organized in Cervia. He startet back in 2005 with a team of organizers a beach tennis tournament with 32 men's doubles. A year later he doubled that number already, the winners are Maurizio Di Cori and Lele Bianchedi. The main draw exeeds to 128 teams during the following years, the event becomes one of the most famous one in the beach tennis world. From 2013 to 2018 this event hast been crowned as the ITF World Championships. Every year Paolo tries to improve thsi event that is already an historic one. Well remembered are the final days of the WC in Cervia in front of a crowd of 3000 spectators. Polo does not only organize beach tennis events but is also involved in beach volleyball with huge success. For our anniversary he sent us a special greeting: "Good luck with your next ten years!".

In our interview he talkes about the show on center court at the WC, the future of beach tennis and his favorite players on the sand of Bagno Delfino.

How much do you miss the World Championships in Cervia?

What is your opinion on the location change of the WC? There were rumors that the ITF would terminate the WC, then it was said that they wanted another location. In the end they decided to keep it in Italy but move it to Terracina.

Maybe the answer is more simple. The ITF didn't want to cover for the prize money of 25.000 Dollars anymore and because that was an important amount for me I decided not to send an application.

Let's say you had a life before the WC, which you organized from 2013 to 2018: the ITF tournament 'Internazionali di Beach Tennis Città di Cervia'. When did you start with this event and what memories do you have of the first edition?

Honestly the first two years I participated only as a player. The organizers were people I knew, so it was a small step for me to join the staff. Like in all couples we had a crisis in our seventh year 2011. And when the question was raised, who wanted to continue organizing the event, I was the only one who believed in it and I moved on alone without the team of twelve persons who were there when it all started.

How has the beach tennis world changed since then?

In the beginning it was all handmade. I remember for example that one year the draw was made during dinner at Ristorante al Moro. We stayed there until 3 am to answer all the questions from players who wanted to know the order of play. The next year because of this experience I came up with the Web Site www.wikibeach.it! These were special moments and we witnessed the period when players left the IFBT family and the entry of the ITF made everything a bit more complex (rules, rankings ecc.).

How important were the WC for the city of Cervia and how did you manage to find sponsors for this event?

The words World Championships always creates a special fascination for the sponsors. The income as we all know has never been much, but with the history of this event I can say that the tournament Delfino with all its momentum always ended up with a small win at the economic statement.

Obviously you didn't organize everything by yourself. During the event you had a team every year that helped you with great passion. How important is it for an organizer to have such a team around you before, during, but also after the event?

There has to be one brain and a lot of hands. This has always been the rule since I was in charge of the event. Gianluca Buccelli not only is a friend, but also a person I was confronted many times. The Ceccaroni family, owners of the Bagno Delfino, is the backbone of the whole event. The volunteers like Piero and Claudio are with me for a decade now. It's a pleasure to work when you meet this kind of people.

For you as an organizer what are the obstacles and also the main goals when organizing a beach tennis tournament?

Unfortunately the budget is always the first obstacle. Then with experience you can risolve unexpected situations like for example the twister that hit us last year during the finals.

Has it changed during the WC?

If you mean with the new figures of the federation, then yes. After all if you want to improve sometimes you need to change things ans maybe it's not that simple to handle them. But once the roles were clear everything went back on track.

You talked to a lot of players during your events: What was the most important feedback you received?

I loved to talk to the players. During the last years I can say that I saw them growing up. 15 years are a lot. A few I saw winning at the beginning and now with a child in their arms. I think that there are three parties in this sport: federation, organizer/sponsor and player. It's like the old game of rock, paper, scissors: There isn't one who always wins, the success of the partnership lies in the balance of things. The players of course tell us their problems, but I can say that in exception of only a few, I always met great people.

You also have seen a lot of players jumping on the sand at Bagno Delfino. You saw Marighella/Mingozzi winning, the raise of the world champions Cappelletti/Carli or Bacchetta and Cimatti, and gave the farewell to a guy like Paolo Tazzari. What player impressed you the most?

I don't want to do a disservice to nobody, but at Bagno Delfino the history of beach tennis came by. Together with Alessandro Calbucci and Marco Garavini, maybe they were the strongest ones. But thinking that Alessandro Calbucci is still number one is a great pleasure for me.

Then a lot of foreign players entered the stage and brought some fresh air to Cervia. How important was this for the sport and maybe also for the WC, that the foreign players started to win?

If I remember right the first victory of foreign players at the WC came from a brazilian mixed and the following year from a women's doubles from Brazil. This was a magnificent situation. Finally beach tennis became really international. In 2019 we had one Russian player, one player from Spain and two Italians in the semi-finals of the WC.

The show on center court with 3000 spectators was unique in the beach tennis world. This sport was born in that region. How have you been following the development of this sport?

We’ve brought-up our supporters well, I have often jokingly said to the players. It didn’t matter who got to the final, our supporters were always plentiful; strength coming from the unique atmosphere that one could breath on the Centre-Court in Cervia.

What are your favorite memories of the WC in Cervia?

I liked it when Davide Benussi and Alessio Chiodioni made it all the way from the qualifying draw to the final. A bus full of people left Rome just to see them in the final.

Obviously there has also been some controversy, like in 2014 when you had to postpone the final to a monday or in 2018 after the ITF had introduced the lines referees. What situations come up to your mind and how did you manage to handle them as the tournament director?

With the intelligence and the need to explain every decision. The role of Riccardo Ragazzini for example as the ref was fundamental. The final on a monday had the same spectators like on sunday. And the presence of the lines referees mad the sport more professional.

The beach tennis world is still growing, outside of Italy there are a lot of big events. Next year the ITF would like to introcuce the Sand Series with four tournaments, like the grand slams of beach tennis. Is this the right way to go?

Every attempt has to be taken. We will see the results only later, but I think it's neccessary to follow them. Beach tennis is still a very young sport. The change of the net height is an attempt but neccessary to make the events suitable for television.

One of those big events will be our tournament in Saarlouis, which has the specific to be organized in the town center. Will you finally be our guest then?

This year I sold my it agency. I decided to focus on the organisation of events. So if I have time I would love to come.

This year our BEACHCLUB2010® is celebrating its 10-years anniversary. We have organized tournaments in Germany and outside, and often we worked together with photography. What memories do you have of our collaboration?

First of all, your seriousness and oprofessionalism. From people like you we can expect nothing but the best. And the road we started leads that way.

Often we talked to the ITF and to other organizers just to united the powers and bring this sport to another level. We never came out of it with a big one. Why?

We are not yet credible for big sponsors. I remember your event with Porsche, but it was attached at the tennis tournament. We still don't have a product to sell. The thing that hurts us is that we realize what potential beach tennis has but we could't make the big deal yet. But I'm confident.

Last year, after 30 years that it has been out of Emilia-Romagna, I organized the first edition of the World Tour One Star in men's doubles. Both the political and the economic role of the region have been fundamental. I couldn't have had the same results with beach tennis. What I liked was the type of organization the beach volleyball federation requires. But I can see that the ITF is gearing up. I'm proud that we were able to have the most participants world wide for this category. As you can see the air is magic in Cervia!

What are your plans in the world of beach tennis?

We decided with the ITF to postpone our event in Cervia at the end of July for our classic 10.000 Dollar event and the following week with an international juniors event hoping that the situation in this corona crisis gives us some room to breath. Maybe we will have a different location but it's still too early to tell.